A rugby union game is called a ‘Match’. It is a competition between two teams each match lasts for 80 minutes plus time added to account for injuries and
stoppages during the game. A match consists of two halves of 40 minutes each.
It is controlled by a single referee on the field of play, two assistant
referees (touch judges), and in professional matches, a match official called
the video referee who can use television replays to rule on a particular
incident. The object of the entire game is that each team scores as many points
as possible. The team with the greater number of points when time is over wins
the match.
Scoring
Points are scored by either scoring a try or a goal.
A try is only scored when the player takes the ball across the goal
line and grounds the ball. Grounding happens when the ball is on the
ground and the player’s hand is on the ball. This ‘try’ is worth 5
points.A  goal is scored by kicking the ball between the uprights and above the
crossbar of the goal posts. There are three ways to score a
goal:
1. a dropped goal (scored in
open play where the ball must hit the ground immediately before it is
kicked);
2.  a penalty goal (awarded
after the opposing side infringes against the laws of rugby and may be kicked
from a stationary ground position or by drop kick);
and
3.  a conversion (awarded after
a try is scored) by either a drop kick or a place kick. A penalty or dropped
goal is worth 3 points; a conversion is worth 2
points.
The Playing Area
The pitch must have 100 meters or less between the goalposts and an in-goal area
behind each post. The length of the in-goal must be between 10 meters 22
meters. The pitch must be less than or equal to 70 meters
wide.The goal posts are ‘H’ shaped and are placed in the middle of the goal line. The two uprights are placed exactly 5.6 meters apart and the crossbar that links them is 3 meters above the ground.
Playing the game
The  team currently with the ball (called ‘having possession’) moves the ball up the
field toward his opponent’s goal line or to try for a dropped goal. These are
the only two ways a team can score in ‘open play’.In  moving the ball up the field, the team with possession meets with the defending team who wish to
1.  stop their opponent’s
progress; or
2.  take control of the ball (A
‘turn over’)
3.  attack the other goal This process is repeated until someone violates the Laws of the game – a foul;
Ball Travel
The team in possession may choose to advance by kicking the ball forward. The ball may be passed from one player’s hand to another as long as the ball does not
travel forwards in the pass. Rugby union is one of the few ball games where the
ball cannot be passed forwards.
Offside
Any player who is part of the attacking team must be behind the ball to take an
active part in the game. A player taking up a position between the ball carrier
and the opposition goal isoffside and may not join the game or
interfere with play.
Tackling
The defending team who wants to take possession will tackle the ball carrier to stop
him and make him release the ball. A tackle consists of grabbing hold of the
opposing player and bringing them to
ground. A tackled player must either pass or release the ball otherwise a foul is
called.Releasing the ball
allows the opposition to contest possession of the loose ball in open play. Play
continues like this until a rule is broken or the ball goes out of play.
Line Out
If the ball goes into touch it is thrown back into play. This may be taken quickly
from one player to a member of his own team. More usual is the
‘line-out‘; here, both teams line up in equal numbers, one meter apart
and contest a ball thrown between them.


Restarts
If  the game stops because a rule has been broken, play restarts with
either

The decision whether to award a Penalty Kick or a Free kick rests with the
refereeing team and is dependent on the nature and severity of the infringement.
A penalty is a more severe award than a free kick
Kicking for Goal
The  attacking team may score by kicking the ball between the posts and above the
cross-bar. When attempting to kick for goal the ball may only be kicked from the
ground:In the case of a place such as a penalty kick the ball can sit in a small plastic cradle or pile of sand. From open play, the player drops the ball to the ground and kicks it – this takes skill and timing.A successful kick at goal is worth three points.
Scoring a Try
The most prized and most valuable scoring method is a ‘try’ attained by grounding
the ball in the in-goal area behind the goal line. This is worth five points.
Conversion
After scoring a try, the attacking team is awarded the opportunity to have a free kick at the goal. This is called a conversion.The conversion kick is taken from a point between the two sets of posts directly in line with where the ball touched the ground for the try. The ball may be any distance away from the posts as long as it is along that line.Kicking the ball between the two upright posts makes a ‘converted try’ and brings an additional two points 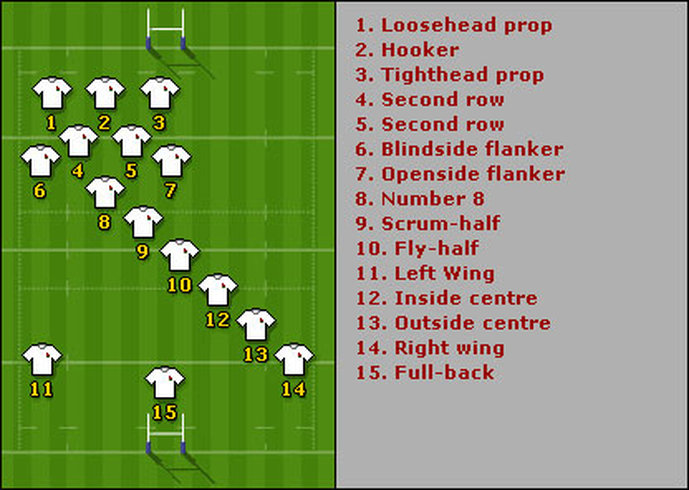